She grew up in Montreal North, not St. Leonard, as everyone assumes. He was raised in Hochelaga-Maisonneuve.

Tonight Gianna Corbisiero and Marc Hervieux meet in Paris, as reconstructed in Place des Arts by the Opéra de Montréal. They are the young, romantic, made-in-Montreal leads in an all-Canadian production of Verdi's La Traviata.

"There are a lot of people coming from my community," Corbisiero confessed in the greenroom of Place des Arts. She was referring to family, friends and possibly some classmates from Our Lady of Pompeii School, where Sister Jocelyne Bouchard insisted that the young soprano pursue voice rather than the language courses that interested her.

Hervieux will have his contingent as well.

"They are all going to be there," he said, meaning not only the usual suspects but also fans who heard him a decade ago as a music-theatre belter in Hair, Little Shop of Horrors, Man of La Mancha and like presentations in the east end.

"They all took part in helping you grow and (learn) your trade. Now wouldn't it be nice for them to hear something good happening to you in their home town?"

Co-citizenship is mere adornment on casting that already looks ideal. By no means unattractive, Corbisiero is a little older than Hervieux - just as Violetta, the high-living but tubercular courtesan of the opera, is presumed to have a few years on Alfredo, the idealistic gallant who loves her.

As for their voices, they blended handsomely in the duet from Massenet's Manon in the OdM gala in December. No less an authority than ex-diva Renata Scotto has judged Corbisiero's soprano to be ideal for the part.

Hervieux has impressed local listeners with his ringing tenor. He also attracted interest recently on an audition tour of Italian opera houses, where he planned to market himself as a no-accent man for French opera.

"Everywhere they offered me a role in Italian," he said. "My God, I am in Italy and they ask me for that. It was very funny."

"Oh, your sound is perfect," Corbisiero commented. And she speaks Italian as well as French.

Hervieux's perverse operatic debut, 10 years ago, was in the bass-baritone role of Don Giovanni. A forgotten play called Don Juan Revient de Guerre required a sequence from Mozart's opera. Hervieux auditioned after having learned the music by ear.

"The big success of the show was the opera part," he said. 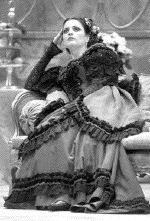 This prompted the young singer - a tenor, as he would soon be told - to begin lessons at the Montreal Conservatoire. He later built his resumé in the OdM Atelier program (where Corbisiero herself had done a tour of duty in the late 1980s).

Last season he made his European debut in Malaga, Spain, as Des Grieux from Massenet's Manon. Eight tourists from Quebec surprised him backstage after one of his performances. He also sang Benjamin Britten's song cycle Les Illuminations with the Thirteen Strings in Ottawa. "Oh, la la," he says about this non-operatic experience. The orchestra's administrators are talking about recording it.

Corbisiero spent much of the 1990s in New York, working on occasion for the Opéra Francais de New York. That company is led by Yves Abel, a conductor widely touted (with no confirmation) as the next artistic director of the OdM.

Two years ago, Corbisiero returned to her home town.

Strange to say, she is still conservative about her vocal prospects, calling herself a "full lyric" soprano rather than a spinto - Italian for "pushed" - with access to heavier Verdi roles. Still, Aida is on her mind.

"It depends on what my voice grows into," she says, hinting that more fiery parts might be suited to her in smaller European houses.

Hervieux also looks before he leaps. He knows the crucial role of Don José in Bizet's Carmen, but will not accept offers before 2005.

He remembers the words of a teacher, Marie-Germaine Le Blanc: "You can sing a lot of rep but you are young and don't really know your voice. You have to take care," and he adds, "I have always worked as a lyric tenor."

However their voices develop - and whether they ever sing opera together again - Corbisiero and Hervieux have been blessed from birth with perfect marquee names. "Gianna" was a happy hybrid of the given names of Corbisiero's two grandmothers, Giovanna and Anna.

Hervieux remembers his initial diction class at the Conservatoire. After Hervieux had introduced himself, the teacher shouted:

"Don't ever change your name."

Considering his growing reputation, he probably never will.